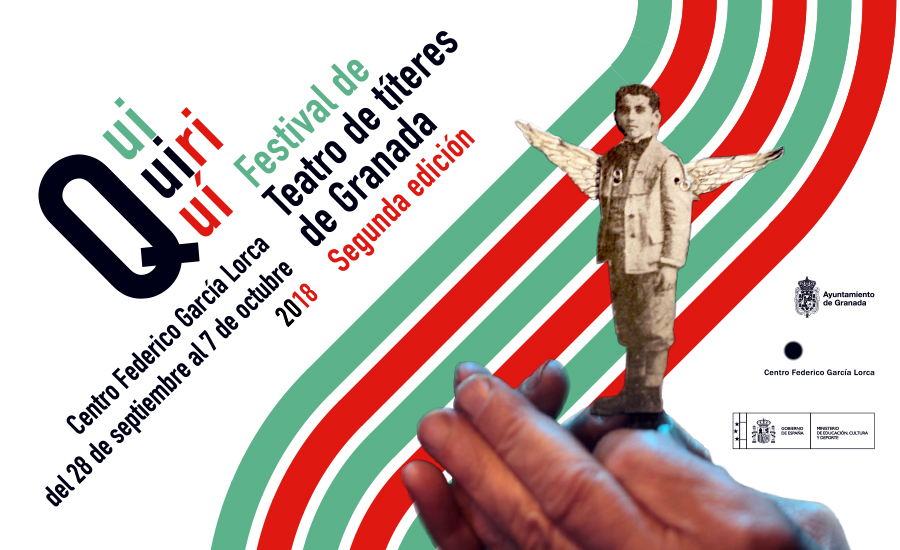 Granada’s Festival of Puppet Theater is called Quiquiriquí. It originated from an idea and consequent proposal by the Federico García Lorca Center Consortium and is sponsored by the Ministry of Culture in collaboration with the City of Granada, the French Alliance of Granada and Granada City of Literature UNESCO. The company Etcétera is in charge of artistic direction.

This year, even more Granada institutions are collaborating with the festival, like the Alhambra and Generalife Patronage, the Manuel de Falla Archive and the City of Granada Orchestra. Also the Granada Noir Festival, the Botanical Restaurant and the Lemon Rock Bar & Hostel.

Autumn 2018 brings Quiquiriquí to Granada. Quiquiriquí is no mere program of shows, but rather aspires to be a complex event with a social component to express all kinds of activities and encounters.

WHAT WE AIM TO DO

The city of Granada deserves — given its history and the strength of its contemporary arts scene — a true festival of puppet theater. The contributions of Falla, Lorca and Lanz at the beginning of the 20th century had a decisive influence on this art form in Spain as well as in Europe and Latin America. Today Granada is an incubator of young talent, is home to high-quality companies, and possesses an understanding and enthusiastic public. The festival was born with the aim to connect citizens with artists and their work, thereby giving visibility and training to emerging talents, and facilitating dialogue between masters of recognizable prestige and those who take their first steps into this art form to put Granada on the international puppeteer map. We intend to create a festival that lives up to European standards by attracting current great names: the consecrated and the newcomers, and which brings together traditional theater experiences with contemporary ones. This is another step toward positioning Granada as the European Capital of Culture by 2031.

The program is organized into three trajectories: performances; drawing together young creators (The Incubator); and ancillary activities. For this year we have scheduled 12 shows from 10 different companies that will make up a total of 31 performances. The countries represented are: Spain, France, Mexico, Canadá, United Kingdom and Italy. We will have companies from Aragón, Castile and Leon, Aragón, Catalonia, Galicia, Basque Country and Andalusia. Most of the works will be premieres in Spain and/or Granada.

For 2018, we are placing special emphasis on the works for puppets by Federico García Lorca, since this year, the City Council of Granada will honor 2018 as the 'Year of Lorca' on the 120th anniversary of his birth, and to welcome the arrival of his legacy to the Centro Federico García Lorca. Therefore it was important to us that the Quiquiriquí Festival also echoed this homage, since García Lorca is an essential playwright to understand the art of puppets in the 20th century. To this end, we’ve chosen two very different works, two plural views from Mexico and Galicia.

Granada has been connected for centuries to the history of puppets. Perhaps we cannot imagine it, but if we ponder that from the perspective of animated figures in elements as old as the automatons of Al-Andalus, the popular Tarasca giants with big heads, to the images of Semana Santa, we see that the relationship with animated objects is more present among us than we often believe. Therein is the origin of puppet theater: its powerful mystery and attraction. In the center of the city in 1923, Manuel de Falla, Federico García Lorca and Hermenegildo Lanz performed the puppet show Títeres de cachiporra (The Billy Club Puppets), which was undoubtedly one of the great contributions of our country to the vanguard puppet movement that was happening all over Europe. In Granada Falla wrote El retablo de maese Pedro (Master Peter’s Puppet Show), a master opera for puppets, which was a synthesis of traditional Spanish music and the avant-garde. In Granada Lanz made the figures for this work’s premiere in Paris and then in Seville, and from his hand was born "planist theater”. In Granada Federico was interested in puppets from a young age, he dedicated several of his works to them and pursued the desire to see them onstage. In Granada these three artists dreamed up new projects with puppets that history did not allow them to perform.

In that city of the twenties, among the various cultural initiatives that emerged, was Gallo magazine, led by Federico García Lorca in complicity with several young writers. "With love for Granada, but with consideration placed on Europe," they tried to shake up the cultural life of yesteryear, to inject new vitality, and to connect artists with each other. Our inspiration to launch this new event is also born from this impulse. Quiquiriquí is a salutation to the masters of this art form, a rallying call to new talent, and a song of illusion. The rooster is "an animal that has a restless and youthful joy", and "enthusiasm is an aurora that never ends".

Ticket sales: Internet: redentradas.com // Telephone: +34 958 10 81 81 // Ticket Office at the Isabel la Católica Theater, Kiosco Redentradas (Acera del Casino) and from one hour before the start of the show, if any tickets remain, at the Federico García Lorca Center //

Granada’s Festival of Puppet Theater is called Quiquiriquí. It originated from an idea and consequent proposal by the Federico García Lorca Center Consortium and is sponsored by the Ministry of Culture in collaboration with the City of Granada, the French Alliance of Granada and Granada City of Literature UNESCO. The company Etcétera is in charge of artistic direction.