1933
On 29 SEPTEMBER set sail from Barcelona to Buenos Aires on the Conte Grande. On board with him was the stage manager Manuel Fontanals. After ports of call in Las Palmas (Canary Islands), Río de Janeiro and Montevideo, they arrived in Buenos Aires on 13 October. En route, however, Lorca was able to work on Yerma and on his lecture Juego y teoría del duende (Play and Theory of the Duende). The two friends stayed at the Hotel Castelar on the Avenida de Mayo, and the local press took great interest in Lorca’s visit. He enthusiastically joined in the city’s social scene, making friends with many writers and artists, including Oliverio Girondo, Pablo Neruda, Ricardo Molinari, Victoria Ocampo, Jorge Larco, Norah Lange, Amado Villar and Salvador Novo. Talks and readings: Play and Theory of the Duende, Cómo canta una ciudad de noviembre a noviembre (How a City Sings From November to November), A Poet in New York and Cante Jondo: Primitive Andalusian Song. Another production of Blood Wedding was performed by Lola Membrives’s company at the Teatro Avenida, this time with sets by Jorge Larco. In NOVEMBER gave a joint lecture with Pablo Neruda on Rubén Darío. Victoria Ocampo published a new edition of Gypsy Ballads. Lola Membrives took the new version of The Shoemaker’s Prodigious Wife to the Teatro Avenida. In DECEMBER Lorca travelled to the Argentinian city of Rosario, where he read Play and Theory of the Duende.

1934
In JANUARY Lola Membrives’s company premiered Mariana Pineda at the Teatro Avenida in Buenos Aires, although Lorca spent most of the month and FEBRUARY that year in Montevideo, where he made frequent visits to see Enrique Díez-Canedo, then the Spanish Ambassador to Uruguay, and Enrique Amorim, José Mora Guarnido (his old friend from Granada) and the writer Juana de Ibarbourou. While staying at the Hotel Carrasco, he was very active socially, lecturing and giving press interviews. Before returning to Buenos Aires he visited the grave of his friend the painter Rafael Pérez Barradas. In MARCH Lorca’s adaptation of Lope de Vega’s La dama boba (A Lady of Little Sense) opened at the Teatro de la Comedia in Buenos Aires, starring Eva Franco. A puppet show was performed in the Teatro Avenida foyer, where Retablillo de don Cristóbal (Don Cristóbal’s Puppet Show) made its debut. Lorca bade farewell to Buenos Aires via the microphones of Radio Stentor, and on 27 March he left Argentina aboard the Conte Biancamano, which arrived in Barcelona on 11 APRIL. Once again in Madrid, celebrations were organised in his honour by La Barraca and, a few days later, by the Spanish University Federation at the Hotel Florida, where Don Cristóbal’s Puppet Show was staged. Spring found Lorca at the Huerta de San Vicente, where Eduardo Blanco-Amor paid him a visit. After a short stay in Madrid, he returned to Granada for his name day on 18 JULY. He then completed Yerma and Diwan of the Tamarit. On 11 AUGUST Ignacio Sánchez Mejías was gored to death at Manzanares bullring. Lorca travelled with La Barraca to Santander and Palencia, where Miguel de Unamuno attended the performance of the early-seventeenth-century play El burlador de Sevilla (The Trickster of Seville). In SEPTEMBER close friends from Granada — including Antonio Gallego Burín, Constantino Ruiz Carnero, Manuel Fernández Montesinos, Luis Rosales and Lorca’s brother Francisco — held a dinner in his honor at El Último Ventorrillo, just outside the city; also present was Emilio García Gómez, the Arabist who would later write the prologue for Diwan of the Tamarit in an edition that was prepared by the University of Granada but never went to press, because of the civil war. A reading of his poem Lament for Ignacio Sánchez Mejías in early NOVEMBER at the home of Morla Lynch in Madrid. He began writing Doña Rosita la soltera o El lenguaje de las flores (Doña Rosita the Spinster, or The Language of Flowers). Margarita Xirgu’s company opened Yerma (with stage design by Manuel Fontanals) at the Teatro Español in Madrid. In DECEMBER Lorca was interviewed in Madrid by Alardo Prats for El Sol. He was still a regular participant at literary gatherings in Madrid, such as those at La Ballena Alegre, the basement of the Café Lyon, the Correos bar on Calle Alcalá and the Chiki-Kutz and Gijón pavement cafés on the Paseo de Recoletos. He met up with Pablo Neruda once again. 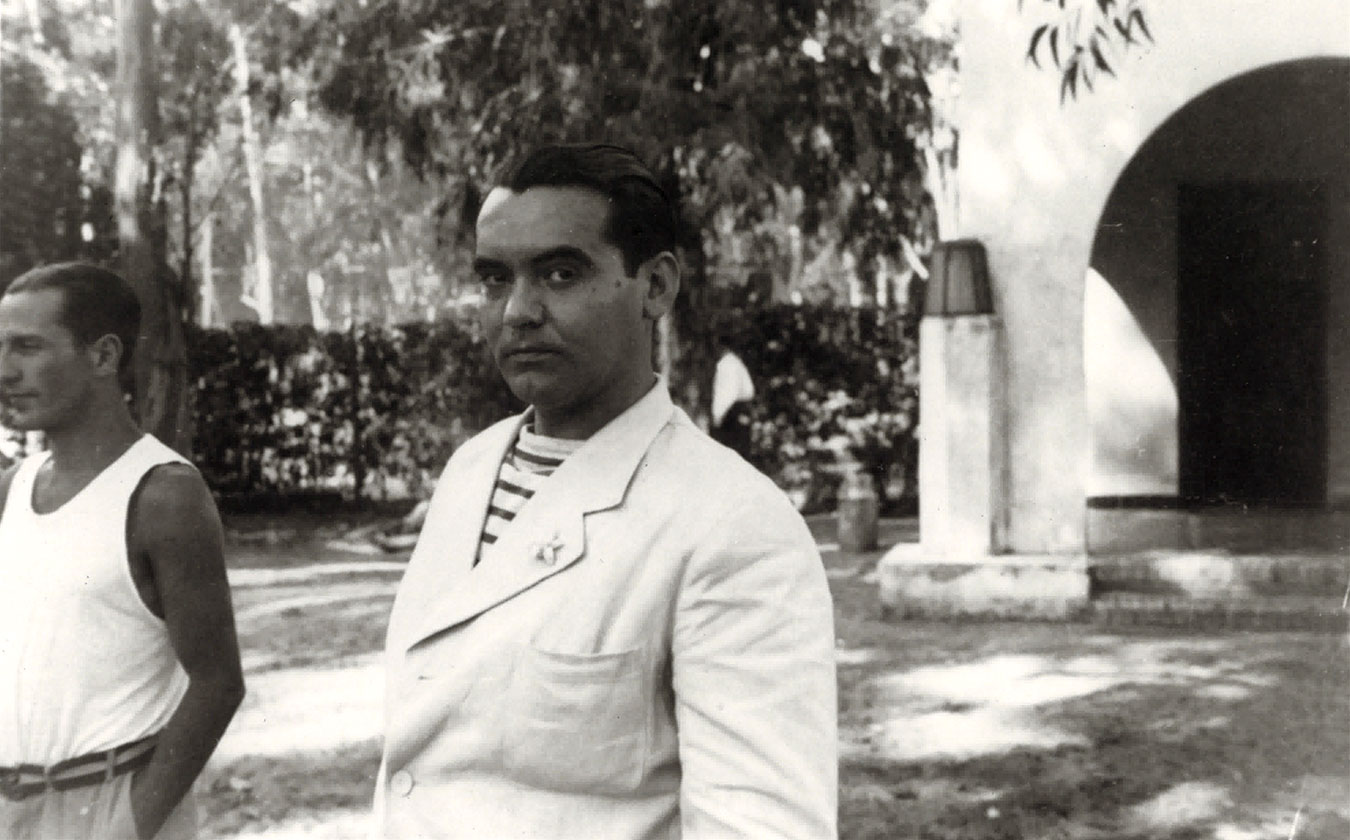 Federico García Lorca with an unknown character at the estate of Alberto Mondino, Uruguay. 1934.

1935
JANUARY saw Lorca collaborating on a production by the Anfistora Club of Lope de Vega’s Peribáñez y el comendador de Ocaña at the Capitol theatre in Madrid, as well as working on a new production of Don Cristóbal’s Puppet Show at the Lyceum women’s club. In FEBRUARY he was interviewed in Madrid for La Voz by Ángel Lázaro (“Proel”). The Neighborhood Playhouse of New York, meanwhile, opened Blood Wedding, which also premiered at the Coliseum in Madrid, produced by Lola Membrives, while a repeat performance was also given of The Shoemaker’s Prodigious Wife. Lorca spent Easter Week in Seville as the guest of Joaquín Romero Murube. There he saw José Bello, Jorge Guillén and José Antonio Rubio Sacristán. Lament for Ignacio Sánchez Mejías was published in Cruz y Raya under the auspices of José Bergamín. After completing Doña Rosita the Spinster, or The Language of Flowers, in JUNE, Lorca was again visited at the Huerta de San Vicente by Eduardo Blanco-Amor, an encounter that was recorded in a set of photographs. In AUGUST, during La Barraca’s summer residency at the University of Santander, Lorca was interviewed by the Italian literary critic Silvio d’Amico. From SEPTEMBER until DECEMBER he stayed in Barcelona, revisiting Salvador Dalí. Yerma opened in Barcelona to enthusiastic acclaim. He read Doña Rosita the Spinster for Margarita Xirgu. He attended the Valencia performance of Yerma, where he wrote several sonnets, later to be known as Sonetos del amor oscuro (Sonnets of Dark Love). He met the young poet Juan Gil-Albert, and was interviewed by Jordi Jou for the Barcelona journal La Humanitat. The Palacio Principal Palace in Barcelona staged Blood Wedding and Doña Rosita the Spinster. He gave a public reading of the poems from Diwan of the Tamarit and the lecture How a City Sings from November to November. He took part in a posthumous tribute to Isaac Albéniz. A special version of Doña Rosita the Spinster was performed for the florists of Las Ramblas in Barcelona. A vast crowd attended a dinner in his honour at the city’s Hotel Majestic. Owing to the demands on his time, Lorca gave up directing La Barraca. In Santiago de Compostela, on the initiative of Eduardo Blanco-Amor, Seis poemas galegos was published by Nos.

1936
JANUARY began with a meeting in Madrid with the Argentinian journalist Pablo Suero. The first edition of Bodas de sangre was published by Ediciones del Árbol, while Primeras canciones (First Songs) appeared in Héroe, the journal run by Manuel Altolaguirre and Concha Méndez. Lorca took part in the tribute to Rafael Alberti and María Teresa León. A poetry reading for El Sitio in Bilbao was accompanied by Margarita Xirgu, who in FEBRUARY would take Yerma for its premiere in Havana. Lorca read poems at an event in solidarity with the Brazilian communist leader Luis Carlos Prestes, and he also participated in a posthumous tribute to Valle-Inclán. In MARCH he made a short trip to San Sebastián, where he read poems from Gypsy Ballads at the Ateneo. In APRIL he gave a talk for Unión Radio about the Holy Week traditions in Granada. Felipe Morales interviewed him for La Voz in Madrid. He planned a trip to Mexico, where Margarita Xirgu had just premiered Yerma. Events were held in honour of Luis Cernuda and Hernando Viñes, while plans to produce the puppet show Los títeres de cachiporra, with musical illustrations by Federico Elizalde, would be frustrated. The Anfistora club began rehearsals of When Five Years Pass, although the production would not come to be staged. In San Sebastián Lorca saw the poet Gabriel Celaya, whom he had met at the Residencia de Estudiantes, and the architect José Manuel Aizpurúa. In MAY he participated in the tribute to the French writers André Malraux, Jean Cassou and Henri Lenor, organised by the Popular Front. In JUNE, together with Alberti, Cernuda, Altolaguirre, Aleixandre, Neruda and Serrano Plaja, Lorca took part in an outdoor poetry reading on the Paseo de Recoletos of Madrid. Having finished The House of Bernarda Alba, he began work on the first act of Los sueños de mi prima Aurelia (The Dreams of My Cousin Aurelia). In JULY Lorca signed a manifesto against the Portuguese dictator Salazar. These were the final days he would spend in Madrid, and included an interview with Luis Bagaría for El Sol. On the 11th, he had dinner with Pablo Neruda at the Chilean port’s home. On the 12th, he read The House of Bernarda Alba at the home of Dr Eusebio Oliver, where Jorge Guillén, Dámaso Alonso, Pedro Salinas and Guillermo de Torre were also present. On the 13th, he called in at the offices of Cruz y Raya, where he had hoped to find José Bergamín but had to leave a note and the manuscript of Poet in Nueva York on his desk. (This is the manuscript that would be used to prepare the first editions of the book after Lorca’s death). He spent the rest of day with Rafael Martínez Nadal, who accompanied him to Atocha station, where he took the train to Granada. Lorca’s final days: on 14 July he settled in at the Huerta de San Vicente, where he was paid a visit by Eduardo Rodríguez Valdivieso. On 18 July Franco led his military coup against the Republican government. Lorca’s brother-in-law, Manuel Fernández Montesinos, the socialist mayor of Granada, was arrested on 20 July. From 6 to 9 AUGUST, falangist groups carried out several searches at the García Lorca home. On 11 August Lorca took refuge at the Rosales family home, as some of its members were well-known falangists in Granada. Nevertheless, on 16 August Lorca was arrested and taken to the Civil Government building in the city. That same day, Manuel Fernández Montesinos was murdered. Petitions and pleas in Lorca’s favour by Manuel de Falla and Luis Rosales had no effect. He was taken to the nearby village of Víznar, where he was shot and killed on 19 August. 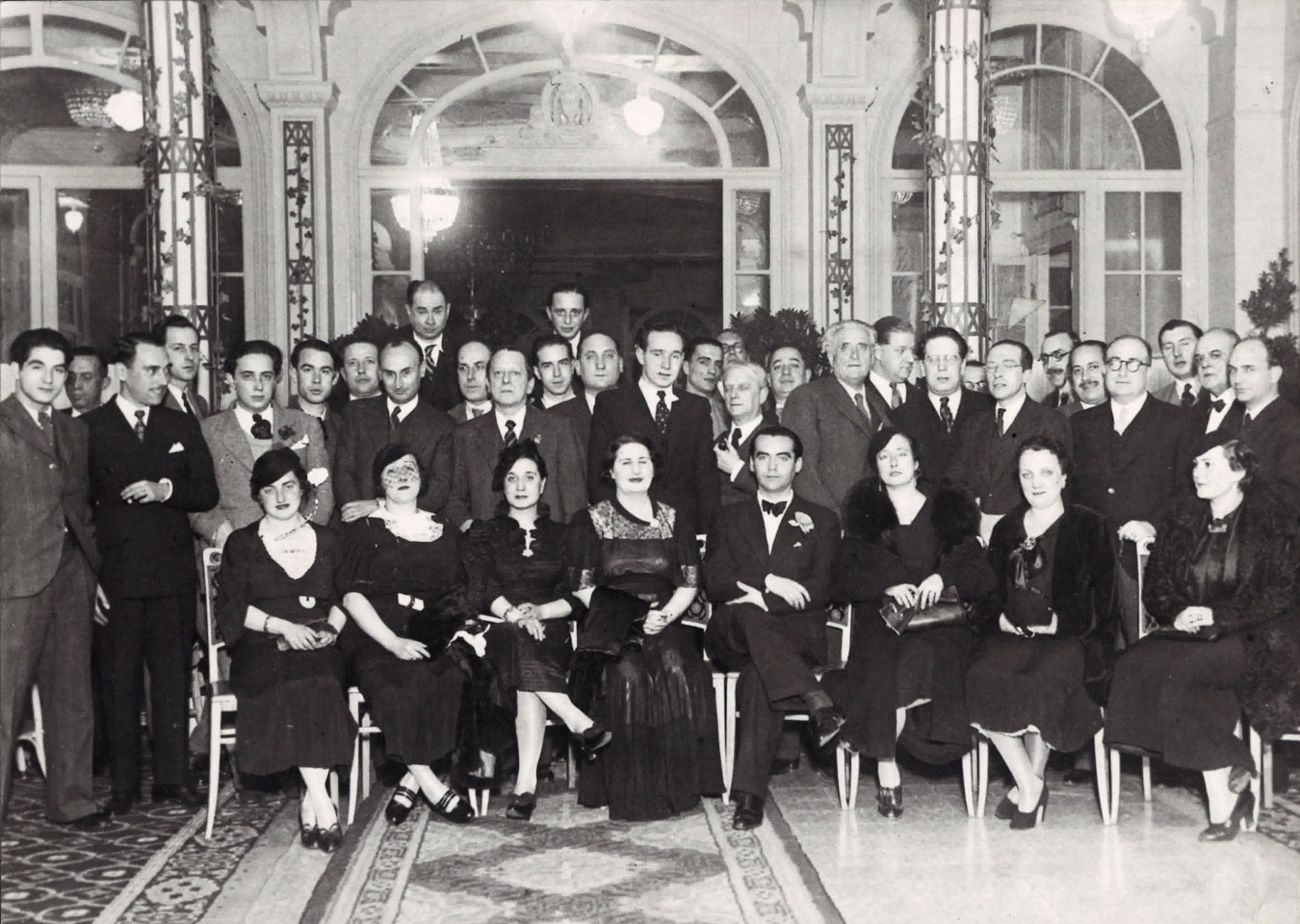 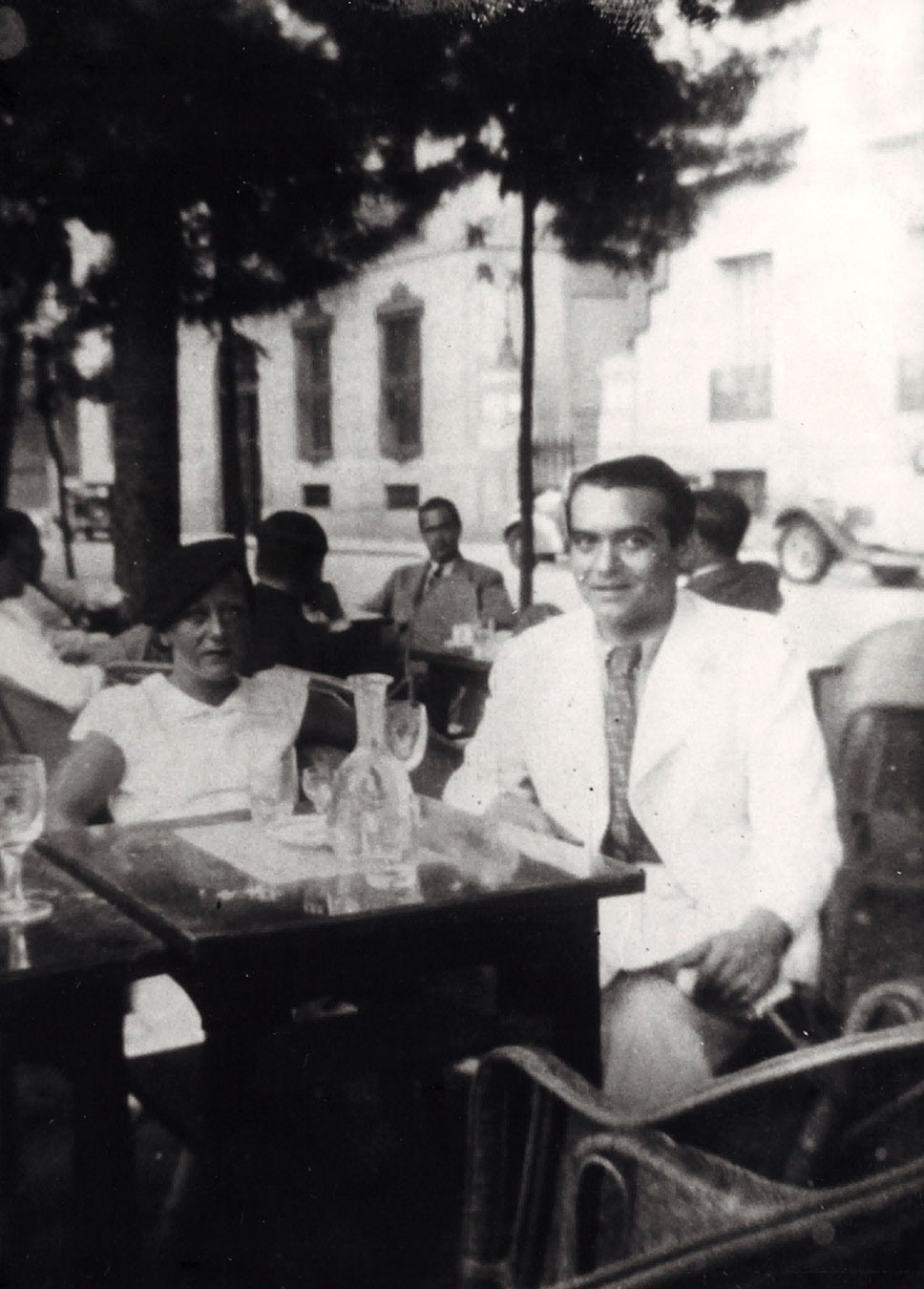