El maleficio de la mariposa [The Butterfly’s Evil Spell] was Federico García Lorca’s first theatre premiere. It took place on 22 March 1920 at the Teatro Eslava in Madrid the home of the ‘Teatro de Arte’ [Art Theatre], a prominent avant-garde project in the Spanish capital, which was led by the author and producer Gregorio Martínez Sierra. Federico had conceived of this little gem, which featured a group of cockroaches, a scorpion, and a butterfly, as a puppet play. It was his little homage to a   of European Symbolism which had celebrated plays about animals as metaphors to reflect on the life of humans with Maerterkinck and Rostand at the lead. Ultimately, Martínez Sierra forced the play towards a more conventional staging which in his judgment would be better received by the audience of the Eslava: the show would be performed by actors dressed in costumes by the Uruguayan painter Rafael Barradas, a cast led by Catalina Bárcena, the leading lady of the company in the role of Curianito [Boybeetle], and La Argentinita, in the role of the Butterfly. In spite of the resounding failure of the performance, with the Madrid audience unable to read the deep tragic dimension of the play, we can still find the seeds of the major concerns that would be explored in his later plays: the cruelty of unequal love – masterfully explored in Amor de don Perlimplín con Belisa en su jardín [The Love of Don Perlimplín and Belisa in the Garden], beauty as a form of transcendence – subtly drawn out in Así que pasen cinco años [When Five Years Pass], theatre as a means of liberation – as was later seen in Comedia sin título [Play Without a Title] – and of course, a desire to legitimate love between equals, albeit here expressed in a highly symbolic manner – which would achieve its maximum expression in El público [The Public].

The exhibition ‘Federico García Lorca: The Birth of a Theatrical Revolution. 100 years since the première of El maleficio de la mariposa [The Butterfly´s Evil Spell], is made up of five sections -“Lorca: from Granada to Madrid. Towards a Symbolist Theatre”, “The Venue” [‘Teatro del Arte’] and the premiere (1920)”, // “The Protagonists”, “Critical Reception” and “Production History” - which seeks to analyse El maleficio de la mariposa [The Butterfly’sEvil Spell] from a holistic point of view: from the initial influences which nourish the young Lorca, the one that arrives from his native Grenada to Madrid in the spring of 1919, to the contemporary stagings, and through the venue which sheltered the premiere, essential to understand the opportunity given to Federico; and the ultimate resolution of the staging and the protagonists of that decisive event for the history of the contemporary Spanish theatre - entrepreneur, actors and actresses, figurine maker and set designer.

The exhibition, conceived as an experience for the intellect but also for the senses, aims to introduce the visitor into our author’s theatrical universe. This exhibition gathers around 75 original pieces, from which 47 come from the Centro Federico Garcia Lorca. However, we also count on significant art loans from the Biblioteca Nacional de España [Spanish National Library], the Institut del Teatro de Barcelona [Barcelona Theatre Institute], el Centro de Documentación de las Artes Escénicas y de la Música [Performing Arts and Music Documentation], the Huerta de San Vicente [the summer residence of Lorca’s family], and three private collections. Among the most notable pieces several manuscripts by Lorca are exhibited for the first time: Del amor [teatro de animales] [On Love [Animal Theatre] and El maleficio de la mariposa [The Butterfly Evil’s Spell]. We also have two original sketches of costumes figures designed by the Uruguayan painter Rafael Barradas, one of the great renovators in the Spanish avant-garde. Barradas himself painted a portrait of Federico which, from a private collection, is also on display at the exhibition and several original sketches from the main sets of The Art Theatre, as well as company programs and original photographs of the performance. In addition we have many photographs of the main protagonists and a wonderful selection of first editions of the texts that directly inspired Federico for the composition of this tragic fable.

The exhibition has a catalogue in which five specialists delve into The Butterfly’s Evil Spell as the first link of a theatre revolution, which Federico himself will lead for almost two decades. It analyses the text in light of European theatrical symbolism, the importance of the Art Theatre as a dynamic framework for the Lorca experience, the decisive contribution of Barradas as a costume designer and, finally, the relevance of the incidental music chosen for the premiere.

Listen to the audio of this activity 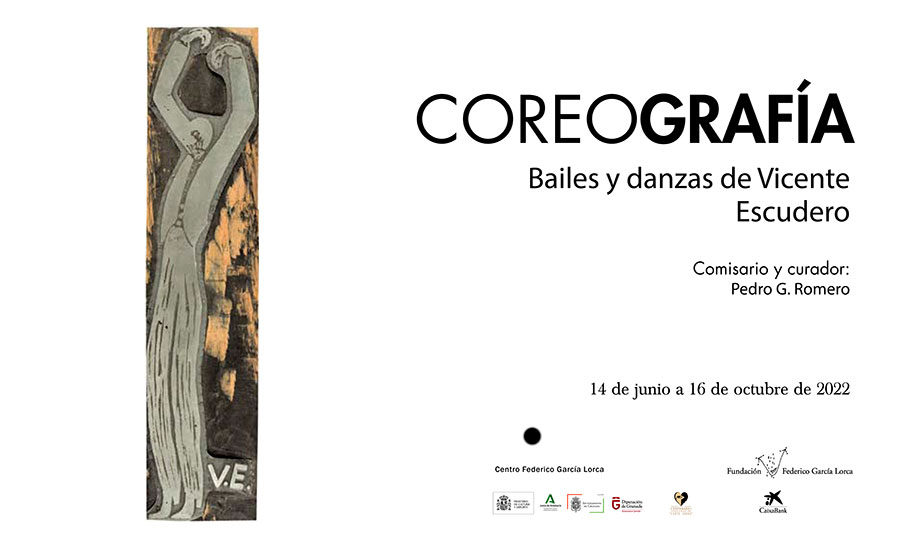 Choreography. The dance of Vicente Escudero