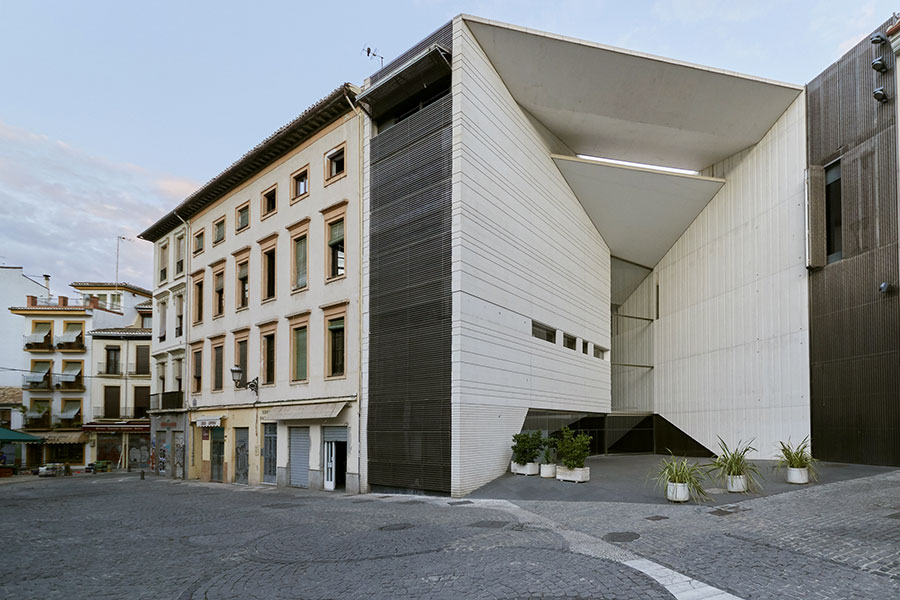 [On the winning design]

[…] Perhaps it would be best to devote a few lines to what seems at first sight to be the greatest — or at least the most striking — virtue of this design: its position with regard to the city.

Positioned at the end of the short slope of the Plaza de la Romanilla, the building refuses to be merely the end of a row of overly discreet frontages, or the filling of an irregular, rather unattractive space, to become a major piece of “eloquent emptiness”, or what we might call “air in action”.

[…] Thus, the square, via the entrance, extends inside the building, and its parts — the theatre, the exhibition hall… — now become part of those special places that pedestrians seek or find as they walk by, in a continuous and almost imperceptible scattering of space that walking itself generates. But also the reverse: the building opens up to frame the city, turning its limit into no more than a membrane, sometimes more readily visible and sometimes less so, depending on whether the large glazed panes are left open or closed; as if, in such constantly vibrating transparency, relieving the stresses between an inside that tends to dissolve outwards and an outside that tends to concentrate inwards. 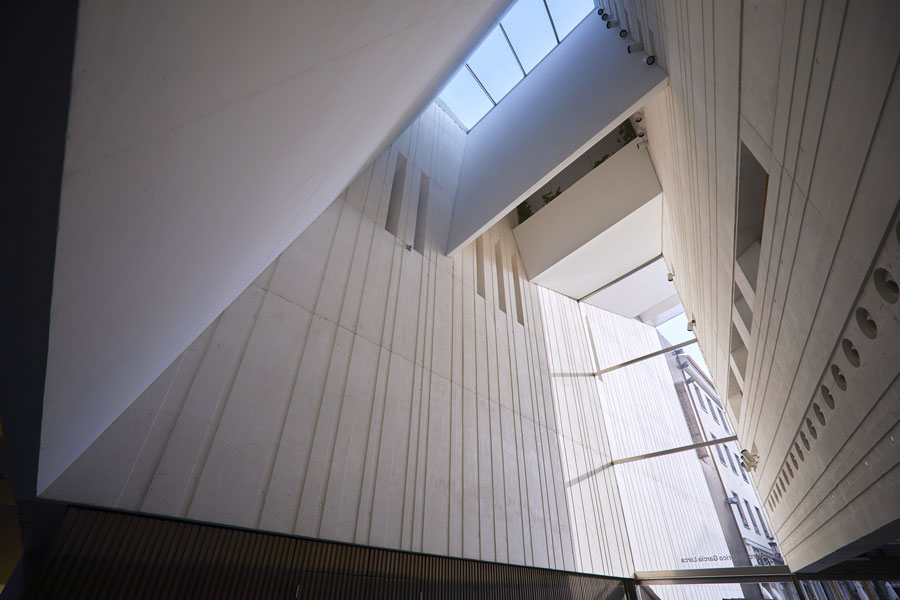 Skylight over the hall 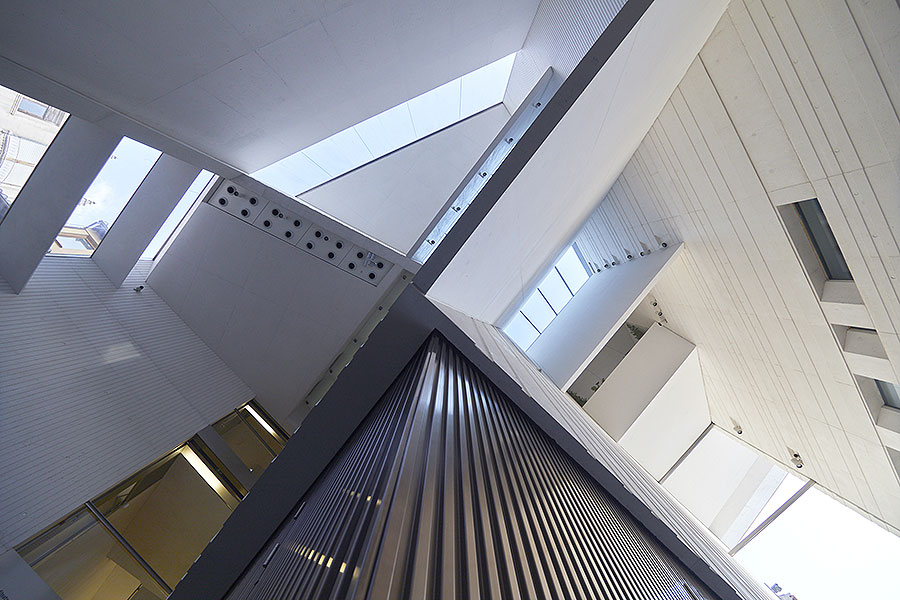 Roofs of the lobby

The limit between the historical urban context and the architectural space fades away as the threshold of the building extends towards the public space of the Plaza de la Romanilla. The design’s strategy consists of sculpting the empty space of the site to generate a large access door to the new facilities, such that the entrance is via a passageway covered by beams and bridges that create a play of shadows and penumbras, establishing unusual three-dimensional and spatial relationships. In turn, by means of a natural, fluid intervention, the square manages to merge with the ground floor of the Centre, which has been designed to be free of structural elements to enable it to host a flexible, versatile programme of activities.

Despite the restrictions on the size of the site, the building is structured into two volumes of 4,700 square metres, arranging a succession of differentiated, flexible, expressive spaces for different cultural uses. A 410-seat theatre equipped with a soundbox and moving walls insulated from any noise from the hall to assure the quality required for concerts and drama productions. A library made up of two split-level spaces: the area for the books themselves and the reading room. From the latter, one can see the suspended box that houses the strongroom for the archive of the poet’s manuscripts. A generously sized exhibition space occupies the basement. Plus a café, a shop, offices, storerooms and technical areas.

The García Lorca Centre has been built of cast-in-place concrete to achieve a surface that is both easy on the eye and smooth to the touch. A texture in response to the search for a finish like that of natural stone to echo the architecture Granada’s old city centre, while achieving urban representativeness, intuited as being without doubt a cultural benchmark for the community. 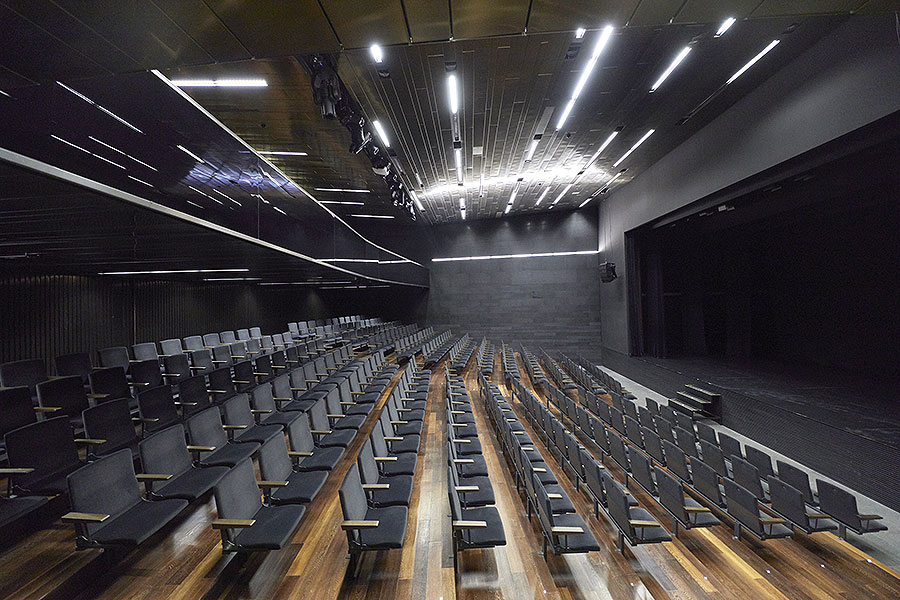 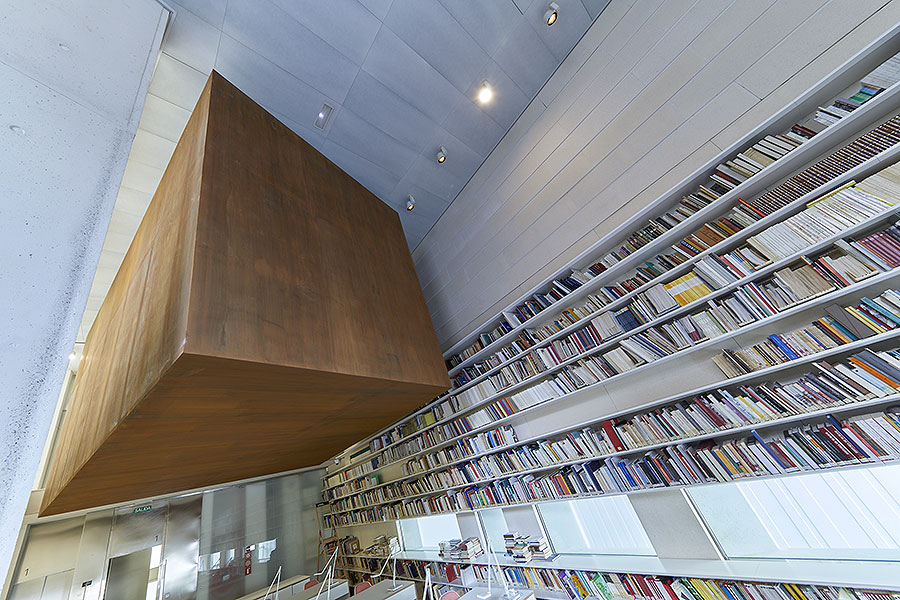